This is a supplement to my 'Clinical Psychology is Anti- or Ante- Science?' post and addresses comments made by Dr Lucy Johnstone regarding the British Psychological Society (BPS) Division of Clinical Psychologists (DCP) 'Paradigm Shift' document. Johnstone was the chief architect of the document and the main spokesperson on that document in the media. 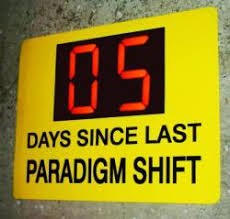 There's no 'f' in paradigm shift


1) Is the plan to replace diagnosis (with formulation)?
Re the position of the DCP in the 'Paradigm Shift' document and whether it represents is a call for replacing diagnosis or not?

It would seem crucial to determine what the British Psychological Society DCP are saying on this issue - both formally through the document itself and informally through their representative i.e. Lucy Johnstone. The document received much fanfare publicity, with its apparent ramifications for service users and providers of every persuasion - any confusion or lack of clarity on such an issue would seem not only unacceptable, but potentially harmful


In trying to clarify the idea of whether formulation is designed as a 'replacement for diagnosis, what follows is part of a Twitter conversation between LJ and myself on this issue:

6.31 June 7th - LJ says the DCP position document is not advocating replacement of diagnosis with formulation

7.05 June 7th - I post two Twitter statements from LJ, where she clearly advocates replacement (or abandonment) of diagnosis with formulation - actual links below

2.27 Hune 7th - @nuAmbiguous asks a reasonable question - seems odd not to want to replace it if you see it as dehumanising 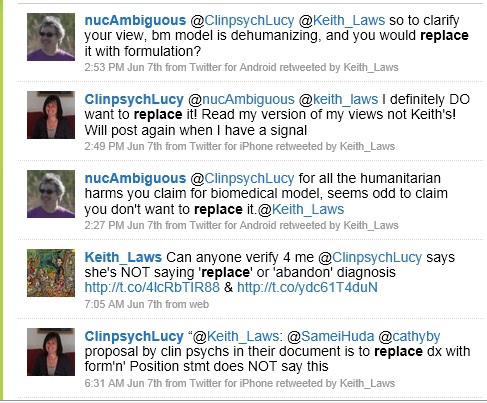 The Twitter discussion starts at the bottom and works upwards

Here are Tweets from Lucy Johnstone saying "Read my blog on how formulation can replace diagnosis" and here saying "UK Clinical Psychologists Call for the Abandonment of Psychiatric Diagnosis..." And finally, Lucy Johnstone's blog clearly headed with abandonment in which she says


"In a bold and unprecedented move for any professional body, the UK Division of Clinical Psychology, a sub-division of the British Psychological Society, issued a Position Statement today calling for the end of the unevidenced biomedical model implied by psychiatric diagnosis."


So, we have replacement or no replacement? Does it depend upon the time and audience being addressed? This is an unacceptable way to operate and should make the BPS and DCP feel rightly embarrassed.

Service users and all providers need to know precisely what is being proposed by the professional body representing UK (clinical) psychologists and its representatives. 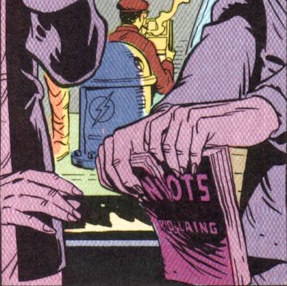 2) LJ says "The DCP statement calls for a joint effort to develop a multifactorial and contextual approach...as an alternative to diagnosis (Rec 3)"

First, you again clearly state 'alternative to diagnosis'. Second, you call for joint effort but with whom? The implication may be ...with psychiatrists and other service providers - but actually Recommendation 3 (shown below) refers only to working with service users - part of the Recommendation you edited from your response on my post

You go onto say Recommendation 5 (below) refers to formulation being promoted as 'ONE' response. This is fine, but what others are you also promoting? and how does this sit with your clear statements above calling to replace diagnosis with formulation? or the DCP webpage saying "...the DCP continues to advocate the use of psychological formulation"

3) You refer to scientist-practitioner models - As you (oddly) refer to yourself as being "glad not to be a scientist", that you see yourself essentially as a practitioner only. This would seem to resonate with the title of my post - 'Clinical Psychology - anti- or ante- science?'

"It is primarily about working with HUMAN EMOTIONAL DISTRESS and HUMAN RELATIONSHIPS. This is why the charge of lack of reliability and validity (in the sense applied to medical diagnoses) is not fatal or even relevant to formulation. (your caps...you seem to like caps)

And that those researchers who have examined reliability and validity in formulation - and found it sadly lacking - are 'deeply misguided'. Might these individuals be the science end of science-practitioner who are deeply misguided?

I also note that these are quite bizarre claims ...Are you denying that psychiatrists a) also work with human emotional distress and human relationships? If, so why is your chief criticism of diagnosis based on issues of reliability and validity? and b) no connection exists at all between your first and second sentence - why is the lack of reliability and validity not relevant to formulation? Just saying they are not does not make it so...as your 'deeply misguided' colleagues would argue

Modern anti-psychiatry is more nots than knots
5) I asked "...couldn't different clinical psychologists give different formulations of the same client" - this is obviously the case from what you and others say. Nonetheless, it is notable that you avoid answering the question and instead divert to reliability in diagnosis

In response I would say a) service users in particular need to know if the formulation you are offering is an unreliable assessment? Would it vary from one psychologists to another?  and b) your non-answer referring me to diagnosis is a simply an attempt to avoid answering, but diagnosis clearly has a lot better evidence than formulation in terms of reliability and validity and the all-important relationship to outcomes (while formulation meets none of these even adequately as noted in my previous post

You also refer to my never using 'formulation' ....as if it is based in some expertise
How does this fit with your saying:

"A formulation is not an expert pronouncement, like a medical diagnosis, but a ‘plausible account’ (Butler, 1998, p.1), and as such best assessed in terms of usefulness than ‘truth’ (Johnstone, 2006)"


"Formulation is both simple and complex, common sense and controversial, depending on how it is defined and used"

I am sure we could all make plausible accounts that have no reference to truth, which are simple or complex, common sense or controversial....depending on how we choose to define and use it!
...it just leaves us in Knots with lots of nots