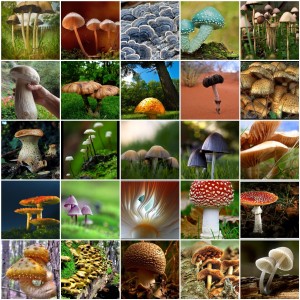 There is no such thing as pure pleasure; some anxiety always goes with it ~ Publius (Ovid)ius Naso (43 BC – AD 17)


The neuroscience writer Mo Costandi recently asked me for a comment on an article he was writing about the fMRI psilocybin (Magic Mushroom) study by Carhart-Harris and colleagues (2012). Naturally, this research generated a great deal of press attention - mostly concerning psilocybin as a potential treatment for depression - even though no data were presented on that topic.


Anyway, what did Carhart-Harris et al do in their pioneering study? Using fMRI (Arterial Spin Labelling [ASL] and BOLD) they compared brain activity in 15 individuals following a placebo (10-mL saline) and after psilocybin (2 mg in 10-mL saline). And they reported:


"...surprisingly, only decreases in cerebral blood flow and BOLD signal were seen, and these were maximal in hub regions, such as the thalamus and anterior and posterior cingulate cortex(ACC and PCC). Decreased activity in the ACC/medial prefrontal cortex (mPFC) was a consistent finding and the magnitude of this decrease predicted the intensity of the subjective effects." 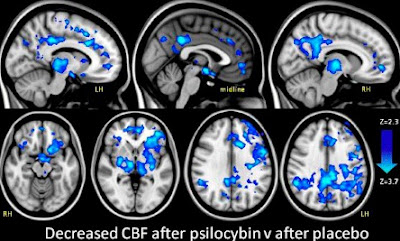 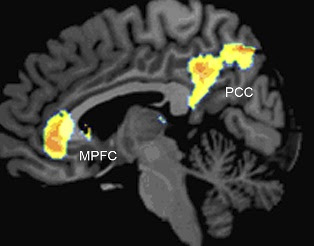 Does psilocybin study itself provide information about participant anxiety? Some data appear not in the paper itself, but in the supplementary materials, where two relevant questions are posed:

So, psilocybin increased ratings for fear of losing mind by 4-5 times; and for I felt afraid doubled or nearly tripled in percentage terms.

Lack of a significant effect does not equal lack of an effect that is significant - Ratings for I felt afraid failed to reach significance - unfortunately sufficient information is not available to derive effect sizes and therefore any issue of power (given the small sample size n=15). Nevertheless in the earlier mock fMRI psilocybin study of Carhart-Harris et al (2011), they did report enough anxiety details to derive Cohen's d, which was greater than 1 - a large effect - again non-significant only because of the low power of the study (n=9). 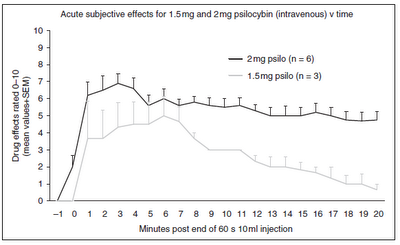 
The world's fastest trip in a scanner? The psilocybin was administered intravenously, with a very rapid onset (see Fig 3). As the authors themselves remarked, finding deactivation was surprising -especially as others report increased activation following the oral ingestion of psilocybin (see Vollenweider & Kometer 2010), which is much slower acting (and was scanned one-hour later). Although Carhart-Harris et als participants had previously tripped (which is an issue itself, but left aside here), their history would not prepare them for zero to tripping in seconds!


An intravenously administered dose of psilocybin, an anticipated trip that maximises in seconds and left alone in an fMRI scanner ~ anxiety-provoking? It seems quite likely that people experienced anticipatory anxiety and anxiety during the scan itself. And most importantly, both types of anxiety are associated with the functional imaging profile documented by Carhart-Harris et al. Nobody denies the effect of psilocybin on the brain, the how much is 'trip' and how much is 'trip anxiety'.

A video of Carhart-Harris talking about the work

Whats Your Poison - LSD vs Alcohol 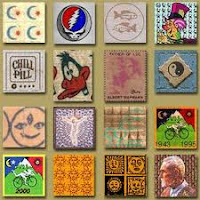 "A single dose of LSD, in the context of various alcoholism treatment programs, is associated with a decrease in alcohol misuse"

This was the remarkable conclusion from a meta-analysis just published by Krebs & Johansen (of the Norwegian University of Science and Technology in Trondheim). Their paper forms part of an intriguing renewed interest in using psychedelic drugs as therapeutic agents and is the first attempt to draw some conclusions from the wider literature through the use of meta-analysis.

Unsurprisingly, the study has received wide media attention with headlines such as LSD 'helps alcoholics to give up drinking' and claims by some, such as Professor David Nutt that:

"Overall there is a big effect, show me another treatment with results as good; we've missed a trick here…This is probably as good as anything we've got [for treating alcoholism]."

Administering LSD to alcoholics was quite popular during the late 50s until the early 70s -as partly evidenced by Krebs & Johansen locating over 4000 relevant articles in their litearture trawl. At one point, Alcoholics Anonymous founder - William Griffith Wilson - advocated dispensing LSD at AA meetings (prior to changes in LSD legality). 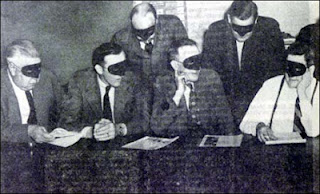 The Watchmen or just early members of an AA group?

So, what did Krebs & Johansen do in their analysis? After screening their 4000+ records, they whittled their meta-analysis down to just 6 randomised controlled trials.


Krebs & Johansen evaluated 'outcome' as the number of alcoholics who showed 'improvement' and so, for each study they calculated an odds-ratio. Overall, the odds-ratio was 1.96, indicating that compared to 'controls', those in the LSD condition were almost twice as likely to show lowered alcohol misuse. Those few studies that followed-up patients showed that any improvement was temporary.

Given the potentially huge ramifications of their conclusions, it is worth considering the Krebs & Johansen paper in more detail - so here are a few reasons why we may want to reign in the rhetoric:

These are only some of the issues - we could also discuss the strange control groups, which clearly are not 'controls' in our normal understanding (e.g. treatment as usual and so on), the inability of the designs to disentangle the effects of LSD from the therapy provided, or the somewhat opaque outcome measures.

Summary
While this is an intriguing re-analysis of old data, I don't think anyone should be placing any orders on the basis of this meta-analysis. The number of studies is small; given the negative findings for all individual studies, it seems quite likely that further unpublished studies exist (with even more negative results); the analysis appears to contain a potentially influential error; at least one other study contains individuals who would seem unsuitable for analysis; and far more controls were assumed to relapse simply because they dropped out of the study. So, with only 6 studies in the meta-analysis, it would seem prudent to think very carefully before offering LSD as a treatment for alcoholism just yet.