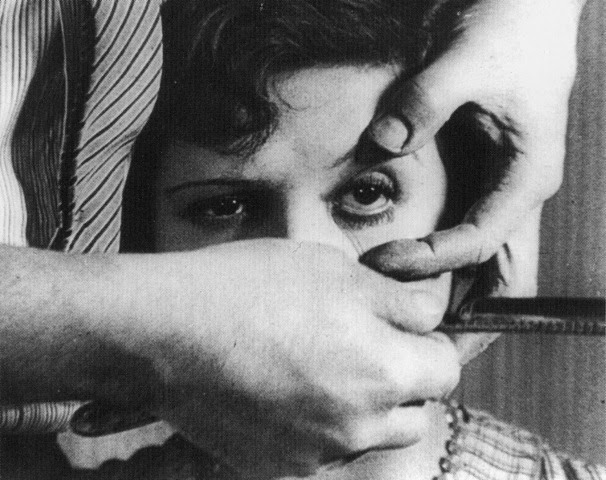 "The New Year starts with a test of an established tenet of treatment in schizophrenia."
British Journal of Psychiatry 'Highlights' January 2014

Its not often that we hear such phrases, but thus opens the 'highlights' section of the latest edition of the British Journal of Psychiatry, referring to our new meta-analysis examining Cognitive Behaviour Therapy (CBT) for the symptoms of Schizophrenia. This is the most comprehensive analysis ever undertaken, covering 50 Randomised Controlled Trials (RCTs) of this 'talk therapy' published over the past 20 years. The paper received press coverage and is, of course available for subscribers at the British Journal of Psychiatry, but I would like to give an overview for the interested lay reader, service-users or anyone who cannot access the journal.

Looking at all trials regardless of quality, the paper reveals a small effect in terms of CBT reducing the symptoms of schizophrenia: effect sizes being 0.25 for positive and 0.13 for negative symptoms. To put these effect sizes into everyday language - the vast majority of patients in the CBT and control groups fail to differ at the end of the intervention: 82% and 90% of the CBT and control groups overlapped on positive and negative symptoms respectively.

But this is not the end of the story...

Study Quality
Studies vary in their quality (eg. studies with fewer methodological controls are more prone to bias). In this context, we draw attention to 'blinding' or 'masking' i.e. whether the person assessing symptoms at outcome knows if patients did or didn't receive CBT. We found that effect sizes were up to 7 times larger in nonblind than blind studies. And if you assess effect size in blind studies, the small effects totally disappear (see Table 1). In other words, when researchers know if the patients had received CBT, it massively inflates the positivity of the researchers ratings of patient benefit at outcome! In plain language, at the end of trials 94% and 97% of the CBT and control groups overlap on positive and negative symptoms respectively

Whats happening in individual studies: Forest Plots
Forest plots show the effect size in each trial (the filled rectangle). The size of the rectangle represents the size of the sample tested in a study. The horizontal lines represent the 95% confidence intervals for each effect - these essentially tell us about the reliability of the estimated effect; shorter lines indicate that the estimate is more reliable; longer lines, less reliable. You will notice that larger CI lines emerge in studies with smaller samples and vice versa. The key thing to ask is ... Do the 95% CIs in any study cross zero? If they do, then the trial revealed a nonsignificant effect of CBT on symptoms.

Looking at Figure 1, we can see 25 of 33 studies document a non-significant impact of CBT on positive symptoms. Nonetheless, the overall effect across all 33 studies is significant i.e. ES= -.25 (95%CI -.37 to -.13). This reveals several things - that even when 75% of studies are nonsignificant, meta-analysis can produce an overall significant effect. 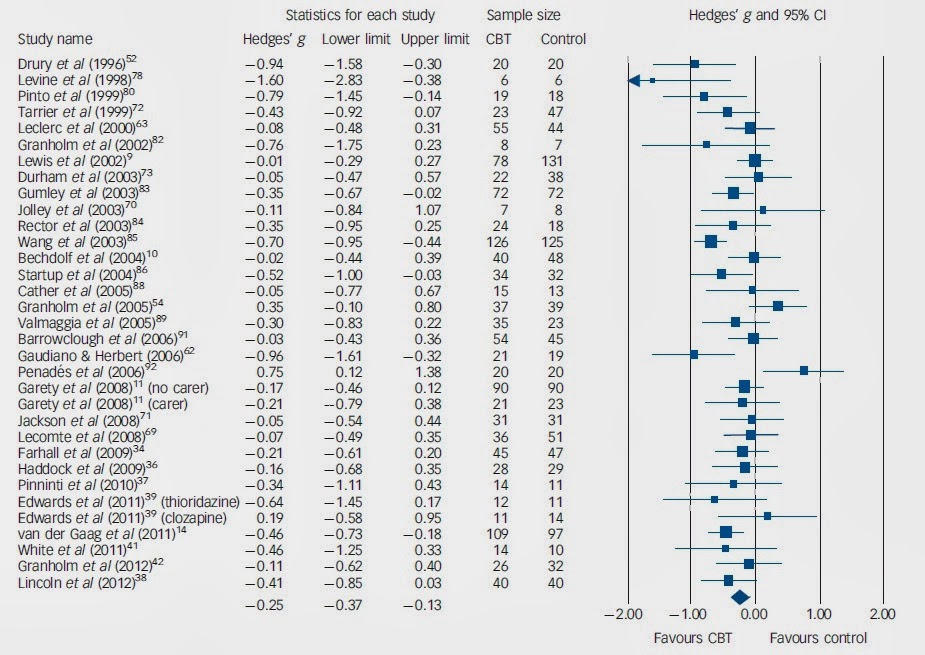 Figure 1. Forest plot of 33 studies examining the impact of CBT on positive symptoms


The picture for hallucinations is bleaker...with only 4 significant studies ever published 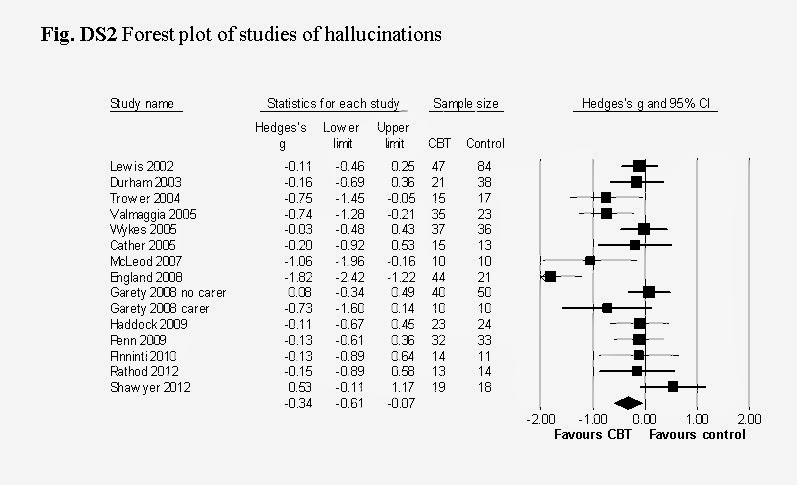 And if it could be worse...it is for negative symptoms ...with no significant study since 2003 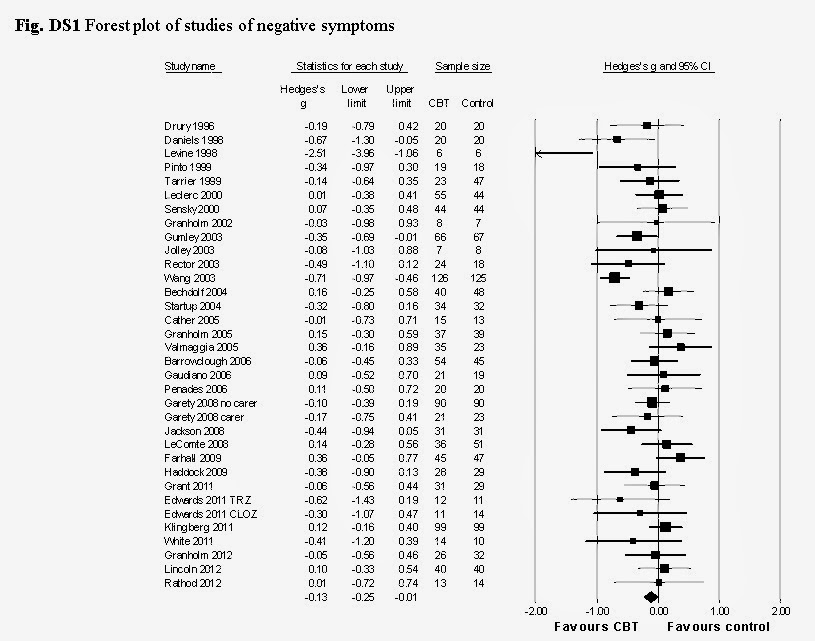 A few key take-home observations from the forest plots:

If anyone is interested in exploring the data and forest plots further, they may do so via a downloadable and interactive database on our website: http://www.cbtinschizophrenia.com/


You Cut Her Hair by Tom McRae

Symptoms or Distress?
One response to me about our paper, from some UK clinical psychologists, has been to say that ...they use CBT not to reduce the symptoms of psychosis, but to reduce the 'distress'. In the context of the clinical guidance provided to UK clinicians by the National Institute of Clinical Excellence (NICE), this response raises interesting questions about the relationship between science and practice.

NICE do state state that CBT be used to reduce distress (see above); however, this is intriguing on multiple levels. First, NICE base their recommendations on the meta-analysis conducted for them by the National Collaborating Centre for Mental Health (NCCMH), in which all of the data examined relates to RCTs aimed at symptom reduction....and not distress

The NICE guide states that distress is the target, but that outcomes in trials is not distress. Second, some UK clinicians are clearly taking NICE guidance at face value saying they use CBT to 'reduce distress' - this is effectively unevidenced or off-label use of CBT. Third, and crucially, the evidence does not suggest that CBT reduces distress. For example, they refer to Trower et al 2004 as an example - actually, the study shows no benefit of CBT for distress after one year.

Additionally, I would question the reference to CBT improving 'function'  - the meta analysis in 2008 by Wykes et al showed that CBT has no significant impact on functioning in studies meeting their own minimally acceptable study quality. Fifth, they reference Garety et al regarding relapse prevention - our re-analysis of that study actually shows an increase in relapse for the CBT group. And finally, by the time of this NICE document in 2009, NICE had removed insight in psychosis as a target for CBT (following their 2002 recommendations), even though they had no evidence for it in the first place


These findings create a challenge for the guidance provided by Government organisations (in the UK, this is NICE) who advocate that "CBT be offered to all people with for schizophrenia".