Ecstasy is widely known as a drug that produces feelings of emotional warmth, and empathy toward others (even total strangers, as well as a general sense of well being)

Beyond these enactogenic properties, however, a far lesser known consequence of taking E is....increased aggression

Reid et al (2007) describe data collected from 260 ecstasy users. After controlling for key predictors of aggression (that are independent of ecstasy use), a higher prevalence of lifetime ecstasy use was linked to higher levels of aggressive and violent behaviour. Particularly those who exhibit low self-control were more affected by ecstasy use than those who do not in terms of aggression. 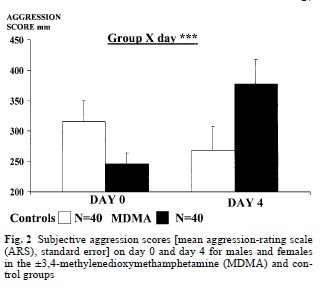 In a rat study, Wallinga et al (2009) assessed (behavioural) aggression in rats 5 days before and 23 days after MDMA administration (by introducing an 'unknown' male rat into cage). They found that MDMA treatment increased aggressiveness in only low aggressive rats and not in medium and high aggressive animals. This suggests that "the vulnerability for increased aggression long after a single MDMA treatment is dependent on the individual's trait aggressiveness and not on the degree of MDMA induced serotonergic neurotoxicity."

Wan et al (2009) examined abstinent Ecstasy users, free of drugs for a minimum of 21 days. They found that aggressive behaviour history correctly identified 73% of those who had been regular ecstasy users and 78.3% of those who had not. The abstinent Ecstasy users showed moderate to large effects for aggression and anti-social behaviour (on lifetime history of aggression rating scale) compared to controls who were mostly cocaine and alcohol dependent. 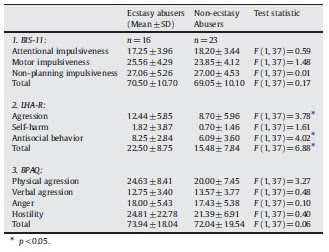 Curran et al (2004) found that ecstasy users show increased aggression 4 days after taking E both on self-ratings and crucially on objective measures of interpretative bias. Their ecstasy and control groups were well matched for age, education, trait aggression, and trait depression. Importantly, the two groups did not differ significantly in their reported use of drugs other than MDMA. On the interpretive bias task, Ecstasy users were faster in completing sentences that could be interpreted aggressively compared with those which had only neutral interpretations. The control group showed the exact opposite pattern of being slower to complete aggressive than neutral sentences - this suggests that ecstasy users are sensitised to aggressive material


Gerra et al (2001) examined participants with a history of MDMA use and nonuser controls were tested on a laboratory measure of aggression (receiving monetary reward for repeated button pressing and provoked by having it taken away by a fictional other). The authors found that the user group was considerably more aggressive than nonusers and that there was a significant correlation found between the extent to which participants had been exposed to MDMA and aggressive response (r=.78). They also found that aggressiveness in the MDMA-using subjects seemed to be associated more with MDMA pharmacological effects than with personality traits. Finally, they noted that the aggressive responses of Ecstasy users were higher than those seen in heroin users in the same experimental scenario.

Finally, the issue of self-harm with ecstasy...