Psychiatry Research has just published a somewhat leftfield paper about fingernails and depression by a group of Chinese scientists. The association between absent lunula and depression in depressive outpatients: A case-control study by Zhou et al (2012).  It concerns  the lunula (Latin Little Moon), which is the white, half-moon shape often visible on all fingers except the little finger.


Zhou et al state that in "Traditional Chinese Medicine absent Lanula are associated with lower physiological response and bad microcircualtion" and then use this as leverage for hypothesising that absent lunula may be linked to depression. 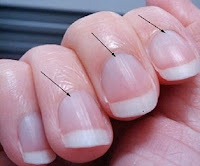 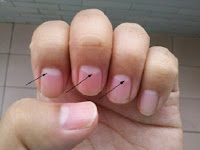 The authors examined fingernails in a large sample of 332 depressive outpatients (aged between 19 and 67) without cutaneous, congenital or other systemic diseases; and without application of drug and henna that might contribute to any change of lunula. They compared the patients with a similarly large sample of 367 healthy controls, who were drawn from ‘spouses of the patients’ or local residents. The two groups were well matched for age and sex.

Come Sta La Luna (by Can) - if feeling unwell, the cure is in the Can

Then they simply observed for absence of luluna on right hand (as right and left tend to be identical in this respect). People were classified as having 1,2, 3 or no luluna (as noted the little finger is excluded having no lunula anyway)


Pink Moon (by Nick Drake) followed by the Black Dog

A large difference emerged with only 17.2% of depressed having all 4 lunula present compared to 68.1% of controls. At the other end, 23.7% of the depressed group and only 9.8 of controls had 4 missing (see Table 2)

Conclusion - mechanism?
The authors state that

While the explanation is somewhat speculative and opaque, it is an intriguing finding showing that a small visible finger detail (lunula) may provide information about inner mental state. Looking at my own fingers, my two hands are quite different - lateralised depression! Perhaps a link between mental health and the 'Moon' has some basis after all, but in a positive manner ...check for your good Moon rising...

Whose nails are they ...was he depressed? Not mine! (but belong to someone well-known at least to UK public)