Its Just a Story: Transition to Psychosis & CBT 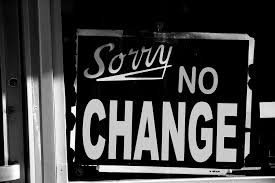 I've been living through changes...And I could swing for you
I can see the veins in my hands...Are showing through
But if you disguise what...These things are doing to me
If you criticize them...I'll know that you can see...
Until you realise
It's just a story
The Teardrop Explodes (Treason)


Oh the irony ....just as many (often in the UK) were clamouring for the DSM-5 to dispense with so-called Attenuated Psychosis Syndrome (which they did reject), the Brits sneaked it in through the back door as (Ultra) High Risk for Psychosis in the new NICE guidelines for Psychosis and Schizophrenia in Children and Young People. In their 485 page guide, NICE advise on 'treatment' for those aged between under 18 (estimates suggest a 0.4% prevalence of psychotic disorders in children aged between 5 and 18 years)

The cliche states that 'An ounce of prevention is worth a pound of cure' and a recent meta-analysis (Open Access in BMJ) examines whether various interventions might prevent or delay transition to psychotic disorders for people at 'High Risk'. The paper was written by some members of the NICE committee who prepared the guideline for children and young people; and underpins some of their decision making process...so, is worthy of closer inspection

Stafford et al declare that "Among people at “ultra high risk” of psychosis, about 22% to 40% transition within 12 months [and that] Interventions that delay or prevent transition to psychosis from this prodromal syndrome could be clinically and economically important." Unquestionably, if up to 40% of those who would go on to develop psychosis (schizophrenia) could receive an intervention to delay or even prevent such a transition, this might be viewed as a worthy ambition.

What is (Ultra) High Risk and what did Stafford et al do?


Stafford et al meta-analysed 5 studies examining people "judged to be at risk of developing psychosis on the basis on a clinical assessment identifying prodromal features."


A few of my observations:

1) The authors report that the Risk Difference is -0.07. This means that CBT produces a 7% reduced risk for transition to psychosis compared to control. To translate this into another common metric, the Number Needed to Treat (NNT), an average of 14 people need to be treated with CBT to prevent one person developing psychosis - this NNT is somewhat larger than typically claimed by individual studies!

Figure 1. Risk Ratios for Number of transitions to psychosis in CBT vs supportive counselling

2) As can be seen in Fig 1, the small significant effect reflects the pooling of 5 studies; however, none of the five studies were themselves significant! The wonderful world of meta analysis (I have referred to this phenomenon previously in my blogs on using LSD to treat alcholism and how to deal with negative findings

Figure 1 also shows that the transition rate is extremely small in these studies - nowhere near the heights of 40% but closer to 10% on average. In other words, 90% of the identified High Risk individuals do not develop psychosis at all! In this context, we need to seriously consider the risks of labelling 9/10 people as High Risk when they are not! The stigma of being labelled High Risk was one major complaint about adding Attenuated Psychosis Syndrome to the DSM-5. As McGorry et al (2003) rightly state "most cases of first episode psychosis still come from the low-risk and undetected groups" (p.784) - not from the ironically entitled 'Ultra High Risk'!


3) Although the NNT and Risk Difference figures are not overly impressive, they do appear to record a significant effect. Nonetheless, the difference between CBT and control in conversion rates disappears beyond 12 months i.e. the point at which this meta-analysis terminates. As the authors state:

If a small effect of CBT disappears beyond 12 month comparisons - how useful is it? And why stop at 12 months?

4) Analysis of the effects of CBT on symptoms of psychosis is also worth considering in transition studies and the authors did examine this.


"Combined effects for positive symptoms of psychosis, depression, and quality of life were not significant at any time point."

To reiterate, CBT did not impact symptoms at all!

5) Finally, the authors claim that all of the 5 included studies were high quality (having excluded others for example, for lack of blinding for raters at outcome). Their Figure 2 (see below) indicates that the 5 CBT studies (Addington 2011; Morrison 2004; Morrison 2011; Phillips 2009 and van der Gaag 2011), were all blind at outcome assessment (see blinding of outcome assessment column)


"Assessors were intended to be masked to the condition to which the patient was allocated; however, this proved difficult in practice because the participants often divulged information about their therapist, or used language that suggested they were receiving cognitive therapy...It proved impossible fully to maintain masking to treatment allocation for assessment of the primary outcome" Morrison et al (2004)

It seems somewhat odd to make such a mistake- as Morrison one of the authors of this current meta-analysis! Removing Morrison et al (2004) from the analysis reduces the Risk Ratio (RR=.60 [.37 to 0.99) which now becomes marginally significant (p=.044) and suggests that the NNT with CBT would be 22 to stop one psychosis transition.

To conclude, it seems that Ultra High Risk for Psychosis, which has been sneaked into NICE guidelines for children and the young, has a limited application - probably less than 1 in 10 individuals actually convert. Moreover, the claim that CBT provides the best form of 'treatment' also seems unsubstantiated. As usual, I am sure we will hear claims for further, better, larger trials - to justify the conclusion already made! 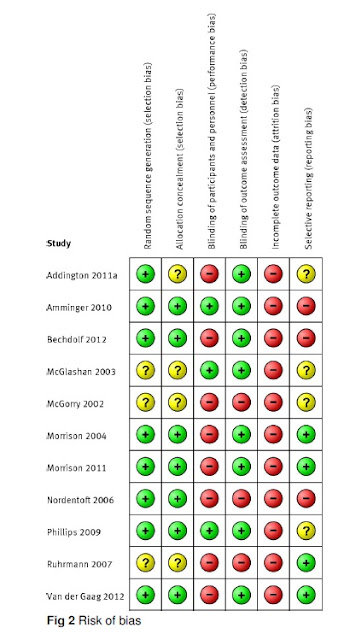