When I critiqued Morrison et als exploratory CBT trial with people who stop taking anti-psychotic medication, I promised to write a post on the final study

Well it appeared in the Lancet today and a free copy is here. I am not going to describe the study in detail as it is excellently covered in the Mental Elf blog today. Contrary to the fanfare of glowing comments by highly respected schizophrenia/psychosis researchers, I think the paper has so many issues that I may need to write a second post. But I'm keeping it simple here to concentrate on the primary outcome data - symptom change scores on the PANSS.


The study examines schizophrenia patients who have decided not to take anti-psychotic medications; 37 were randomly assigned to 9 months CBT and 37 assigned to - what the authors call TAU (but is obviously quite unusual...in an important manner that will become clear below)

What do the primary outcome PANSS scores (total, positive and negative symptoms) reveal?

Table 1. PANSS scores during the intervention (up to 9 months) and follow ups to 18 months

The key questions are:
Do the CBT and TAU groups differ in PANSS scores at the end of the intervention (9 months) and at the end of the study (18 months)? One simple way to address both questions is to calculate the Effect Sizes at 9 months and at 18 months. 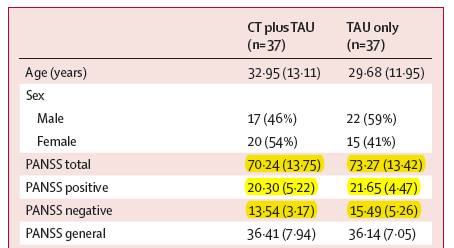 If we compare baseline and the end of the intervention 9 months:

So, after 9 months of intensive CBT intervention, controls - who don't even receive a placebo - show a greater reduction in positive and negative symptoms !

What then have Morrison et al shown?
I would argue that their data show, for the first time, how patients who choose to be unmedicated display fluctuations in symptomatology (as we might expect given they are unmedicated) ...but crucially, these fluctuations are as large as the changes seen in the CBT group. Hence, it is reasonable to ask...have Morrison et al simply documented 'normal fluctuation' in the symptomatology of unmedicated patients ...and nothing to do with CBT
Posted by Professor Keith R Laws at 09:44