"Do you think a zebra is a white animal with black stripes, or a black animal with white stripes?"

Why do researchers squabble so much? Sarah Knowles recently posted this interesting question on her blog - it was entitled Find the Gap. The debate arose in the context of the new Lancet paper by Morrison et al looking at the efficacy of CBT in unmedicated psychosis. I would advise taking a look at the post, plus the comments raise additional provocative ideas (some of which I disagree with) about how criticism in science should be conducted.

So, why do researchers squabble so much? First I would replace the pejorative squabble with the less loaded argue. In my view, it is their job to argue...as much as it is the job of politicians to argue, husbands and wives, children, everyone- at least in a democracy! Our 'science of the mind', like politics gives few definitive answers and .... so, we see a lot of argument and few knock-out blows.


'I am Catweazle' by Luke Haines
What you see before you is a version of something that may be true...
I am Catweazle, who are you?

But we might ask - why do scientists - and psychologists in particular - rarely land knock-out blows? To carry the boxing analogy forward...one reason is that opponents 'cover up', they naturally defend themselves; and to mix metaphors, some may even "park the bus in front of the goal".

And like boxing...science may sometimes seem to be about bravado. Some make claims outside of the peer-reviewed ring with such boldism that they are rarely questioned, while others make ad hominem attacks from the sidelines ...preferring to troll behind a mask of anonymity - more super-zero than super-hero.

A is for Angel Fish

Some prefer shadow boxing - possibly like clinicians carrying on their practice paying little heed to the squabbles or possibly, even the science. For example, some clinicans claim that the evidence regarding whether CBT reduces the symptoms of psychosis is irrelevant since - in practice - they work on something they call distress (despite its being non-evidenced). Such shadow boxing helps keep you fit, but does not address your true strength - you can never know how strong your intervention is ...until its pitted against a worthy opponent, as opposed to your own shadow!

Despite this, the clashes do emerge between science and practice. Many fondly remember Muhammad Ali and his great fights against the likes of Joe Frazier (less attractive, didn't float like a butterfly). Fewer recall Ali's post-retirement battles including with the professional wrestler - Inoki - not a fair fight, not a nice spectacle and not decisive about anything at all - this is like the arguments between scientists and practitioners - they have different paradigms, aims and languages, with probably modest overlap - often a no-contest.


Race for the Prize by Flaming Lips
.

Is 'Normal Science' all about fixed bouts?
We should acknowledge that some bouts are 'fixed', with some judges being biased toward one of the opponents. Again in science, this may happen in contests between an established intervention (e.g. CBT for psychosis, anti-psychotic medication etc) and those arguing that the intervention is not so convincing. Judges are quite likely to be advocates of the traditional therapy, or at least the status quo - this is a part of Kuhnian normal science - most people have trained and work within the paradigm, ignoring the problems until they escalate, finally leading to replacement (paradigm shift). These changes do not occur from knock-out blows but from a war of attrition, with researchers hunkered down in the trenches possibly advancing and retreating yards over years. What this means is that its hard to defeat an established opponent - unseating an aging champion requires much greater effort than simply protecting that champion

Monster-Barring: Protective Ad Hoc Championship Belts
Returning to CBT for psychosis, nobody should expect advocates to throw in the towel - that is not how science progresses. Rather, as the philosopher of science Imre Lakatos argues, we would expect them to start barricading against attacks with their protective belt - adding new layers of ad hoc defence to the core ideas. Adjustments that simply maintain the 'hard core', however, will highlight the research programme as degenerative. 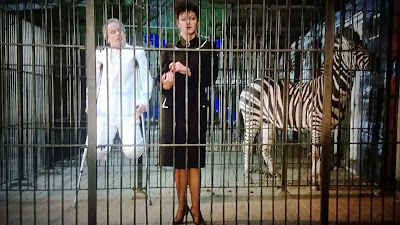 Not a leg to stand on

Of course, the nature of a paradigm in crisis is that ad hoc defences emerge inluding examples of what Lakatos calls 'monster barring'. To take an example, CBT for psychosis advocates have seen it as applicable to all people with a schizophrenia diagnosis and when this is found wanting, the new position becomes: schizophrenia is heterogeneous and we need to determine for whom it works- monster barring protects the hypothesis against counter-examples by making exceptions (not tested and evidenced of course). This could go on indefinitely of course: CBT must be delivered by an expert with x years training; CBT works when used in the clinic; CBT works for those individuals rated suitable for CBT ...ad infinitum...What happens ultimately is that people lose faith, break ranks, become quiet deserters, join new ascending faiths - nobody wants to stay on a losing team.

Although sometimes, like Sylvester Stallone, scientific ideas make a come-back...spirits raise and everyone gets hopeful again, but secretly we all know that comebacks follow a law of diminishing returns and with the prospect that holding on for too long comes increased potential for... harm. A degenerative research program may be harmful because it is a waste of time and resources, because it offers false hope, and because it diverts intelligent minds and funds away from the development of alternatives with greater potential.

"If even in science there is no a way of judging a theory but by assessing the number, faith and vocal energy of its supporters, then this must be even more so in the social sciences: truth lies in power." Imre Lakatos


Queensbury rules
All core beliefs have some acceptable protection, the equivalent of gum shields and a 'box' I suppose, but some want to enter the ring wearing a suit of armour - here I will briefly mention Richard Bentall's idea of rotten cherry picking which emereged in the comments of the Find the Gap blog. Professor Bentall argues that as researchers can cherry pick analyses (if they dont register those analyses), critics can rotten cherry pick their criticisms, focusing on things that he declares... suit their negative agenda. In essence, he seems to suggest that we ought to define what is acceptable criticism on the basis of what the authors declare as admissible! I have already commented on this idea in the Find the Gap post. Needless to say, in science as in boxing, you cannot be both a participant and the referee!

Spectator sport
Some love nothing more than the Twitter/blog spectacle of two individuals intellectually thumping each other. But for others, just like boxing, science can seem unedifying (a point not lost on some service users ). Not everybody likes boxing, and not everybody likes the way that science operates, but both are competitive and unlike Alice in Wonderland, not everyone is a 'winner', but then even the apparent losers often never disappear....thus is the farcial arts.